Five Reasons ACTA Must Be Stopped

With the ACTA protest in London coming up this Saturday, Stu Anderson brings opposition to ACTA into focus: 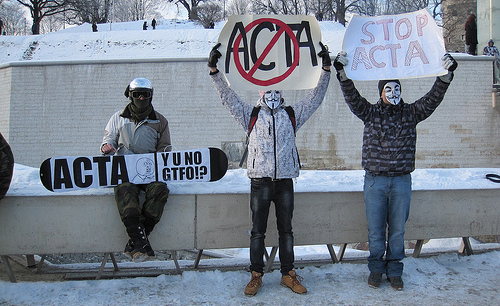 1. It is an Anti-democratic Instrument

Already covered in this Zine is how one of the major concerns over ACTA has been the shady and secretive way in which the instrument has been formulated behind closed doors.

ACTA was negotiated in secret, and indeed drafts of the text of the agreement only initially made it into the public domain after leaks from insiders to the process worried about the implications of the instrument. The US even blocked the release of draft versions of the agreement on the grounds of 'national security'. It was only after constant leaks that an official draft was finally released in April 2010, and even now many of the key preparatory documents and official opinions remain unreleased.

Concerns over the problems with the way the instrument have been negotiated have been so marked that the situation forced Kader Arif, the European Parliament's official rapporteur for ACTA, to resign in protest at the secrecy surrounding the agreement.

The negotiations have also bypassed the established (legitimate and transparent) international channels for the creation of binding transnational IP agreements, such as the WTO and WIPO. This becomes more important when we realise that the scope of ACTA will likely reach far beyond the signatories to the document, effectively being used as a bargaining chip to force developing countries into accepting similarly harsh IP regimes and forcing western proprietors' agenda on the world at large.

Of course, all of this is profoundly undemocratic; ACTA being an instrument which, if ratified, will bind national legislatures of signatories in a number of key respects regarding their domestic IP provisions and effectively pushing through a SOPA style copyright regime via the back door. This is even more so the case with the ACTA Committee- a body created by ACTA with the power to interpret and modify the agreement, as well as make amendments, again without using legitimate national and international channels.

2. It will have a chilling effect on innovation and freedom of expression

Moving to the provisions of the agreement itself, there are wide ranging concerns that it will have profound and dangerous effects on freedom of expression and culture. If ACTA is enacted, ISPs and online services will find themselves increasingly under pressure from the entertainment industries to monitor and filter content as well as individual communications.

This effectively leads to fears of censorship, removed from legitimate judicial channels and placed in the hands of private actors, as well as to the damaging effects for the principle of net neutrality in general. The agreement also provides for draconian search and seizure measures to become widespread.

This, allied with the harsh criminalising provisions of the instrument (see below), mean the potential for family computers being seized, denying them access to freedom of information and expression in the absence of any wrongdoing.

Needless to say, such measures would have a devastating and chilling effect on internet users and startups alike. Provisions such as the broadly-defined criminal sanctions for 'infringement on a commercial scale' (so broad as to potentially include not-for-profit filesharing as well as legitimate online services) will act as a harsh deterrent to innovation and freedom of expression.

3. It is Unjustifiably Harsh

ACTA seeks to employ oppressive punitive conditions as well as extend criminality for acts previously only considered civil matters. As mentioned above, ACTA seeks to cover activities which are both for-profit and not-for-profit, with provisions drawn in as vague and broad a manner possible so as to include within their scope widespread filesharing practises. This effectively criminalises a generation of net users, punishing them for an industry's failure to adapt to new technology. This should hardly be surprising since criminalising file-sharing was specifically part of the EU Commission's ACTA mandate, even without any motive of financial gain.

In terms of civil enforcement the provisions of ACTA are no less harsh, specifying provisions to include mandatory schemes of statutory damages which could lead to file-sharers in signatory countries becoming financially liable on a massive and disproportionate scale.

The document additionally provides that judges potentially take into account, in awarding damages, a number of considerations of value as submitted by the right holder, including lost profits, the market value or even the suggested retail price. This last provision gives standing to the 'lost sale myth'; an entirely unrealistic portrayal of the actual cost to the rights holder of file-sharing (if I download a track, this does not reflect that I am necessarily willing to pay the retail price).

Further, the provision that a judge can give credence to considerations from one side of a case and not another, while not technically binding, is practically unheard of in domestic law, and drastically impinges upon the right to the defender of a fair trial.

4. It is Inherently biased towards the interests of big business

If we expand upon this specific example of bias, it quickly becomes clear that the whole text of ACTA is inherently skewed towards a view and consideration of intellectual property rights which stresses the importance of ownership to the detriment of vital fair use provisions.

Unsurprisingly this is exactly the view of intellectual property law lobbied for by big business; one which favours their own interests over the those of creators and innovators. ACTA increases and strengthens the powers of the entertainment industries across the board, increasing criminal and civil sanctions and establishing new procedures which allow the big corporations to police the internet and bully smaller creators and innovators.

Importantly, the instrument makes mandatory the restrictions associated with a proprietary regime in intellectual works without making mandatory subsequent fair use provisions which are so vital for innovation. In such a climate, with national legislatures hamstrung by the binding nature of ACTA and with pressure on all sides from entertainment industries, it seems unlikely that the power they retain will be used to increase fair use provisions, much rather the opposite.

Another problem, already touched upon, is that the document also fails to consider fully the fundamental rights of all parties affected by the agreement. The European Economic and Social Committee has pointed out that the rights to information, health, sufficient food, right to farmers to select seed and the right to culture, all suffer in the wake of an overbearing emphasis on property rights. It must be remembered that no property right is an absolute right in anything and this is even more explicitly so the case in intellectual property.

5. It is just the latest effort in a Punitive, Repressive and ultimately self-defeating industry Strategy.

Ultimately, the ground of the problem with ACTA is that it is a document which seems to be designed with a particular repressive and socio-economically damaging strategy in mind. It relies on a reification and a ramping up of the greediest concerns of an outdated industrial paradigm which would seek to lock down culture, technology and innovation in the name of profit. I say this is self-defeating because, in fact, locking down culture is ultimately not only socially detrimental, but is also economically damaging.

ACTA is clearly designed to be a blueprint for things like SOPA and PIPA coming in through the back door of secretive international negotiation, in consultation with the content and pharmaceutical industries, intent on widening the spread of DMCA-like legislation worldwide, first through legal instrument, and then through political pressure.

Ultimately ACTA is just the latest of many attempts to drive through legislation pursuing a harmful strategy which obscures the chance any meaningful opportunity to start to think about how intellectual property laws might be reformed in ways which reconnect it with its roots – an instrument designed to secure the proliferation of creative works and to motivate people to create, to innovate and to produce for the common good. It is a strategy that begun in the eighteenth century, utterly unequipped to deal with today's technology and way people today innovate. It is for this reason more than any other that any legislation pursuing this strategy, be it SOPA, PIPA, ACTA or any other incarnation, must be strongly opposed.