Calum Grant looks at the history of video game censorship. 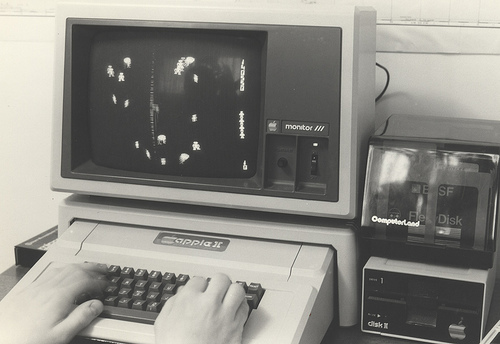 Image: my first computer by Randy Troppmann CC BY 2.0

Censorship is a funny thing. When the likes of Pong, Pacman and Tetris were initially making waves, few people could have anticipated the regulatory laws, fines and prosecutions that were to be instituted over pixelated images bouncing around computer screens. But like all new technology - be it the internet, the printing press or even electricity - once the novelty had worn off and people became aware of what new possibilities were being opened up, governmental control measures were accordingly introduced.

After Michael Faraday had discovered how to create electrical power through mechanical means he was asked by William Gladstone, the then Chancellor of the Exchequer, about the practical applications of this newfangled electricity. He replied that while he wasn't precisely sure what they would be, but was sure the government would inevitably find a way to tax them. Not only are computer games taxed in the UK, but their content is subject to legislative control. What is and isn't a suitable virtual task or setting for the citizens of this country is decided upon by a group of people who really aren't players of such games, let alone at the cutting edge of what is out there. It wasn't at the behest of several experts or various special interest groups that brought censorship to the games industry. Indeed, what ultimately instigated rating systems and the means to ban games was calls from the national press, in a chilling example of how few vocal objectors are needed to curb freedom for everyone in the United Kingdom.

The aforementioned games came into being in the late 1970's and early 80's, but over the course of following decades technological progress has allowed games consoles to establish their presence in the homes of more and more houses in the western world. Two dimensional platform-based digital adventures were all the rage, and were marketed specifically towards children. This salient fact is often overlooked, that this new technology which utilised the improving processor speed of computers was first being used as a new range of children's toys. Rather than this new gadget being confined to the tinkering hands of the wealthy, the experts or the posers, it found its way into the little hands of a curious and captivated generation.

Unfortunately, it was also this novel aspect which brought about calls from the tabloid press to introduce regulatory standards akin to those used for film. The violent nature of games like Mortal Kombat, in which players street fight to the death, served as lightening conductors for the sparks of misinformed 'save the children' like calls to fall upon. That was the early 90's, and to look at these games now and see the poor and crude graphics they employed makes one wonder how they ever caused anyone to bat an eyelid, let alone compel them to call for the introduction of legislation.

Nevertheless, the UK games publisher trade body relented and created several age cut-offs customers would have to meet in order to legitimately purchase them. In spite of this, games with violence towards people or animals, and/or the inclusion of sexual content had to be submitted to the BBFC, the body whose primary responsibility is the age rating and censorship of motion picture films. In a somewhat comical turn of events it later transpired that the 'Video Recordings Act' which they used to prosecute retailers for selling games to minor was technically unenforceable due to a technical error during the passing of the bill. This strange anomaly was discovered while civil servants were researching the bill was was to supersede it in 2009, meaning for a time those supplying any violent and sexy games to children could not be lawfully be prosecuted. Unfortunately this golden age was short lived, as the blunder was soon corrected.

The first game ever to be effectively banned in the UK was the late '90s title 'Carmageddon' in which the gamer roams the streets in a car running down pedestrians. Though not banned per se, it was denied a rating classification making it technically unsellable. The games producers, presumably anticipating such action, already had an alternative version of the game in which the humans on the pavements were replaced with green blooded zombies. When resubmitting this version of the game to the censure board it passed with flying colours especially green. Such creatures didn't give rise to the same qualms and it was given an 18 certificate.

Players of one of the biggest game franchises in existence 'Grand Theft Auto' will perhaps be dumbstruck to learn of this ruling, given that the GTA games allow the player to run down, shoot and beat up the virtual innocents bystanders in the game to their hearts content. It is thanks to games like Carmageddon that enough ground was broken for misanthropes everywhere to have an outlet for their tendencies to be unleashed without actually harming everyone. Some might argue they are harming themselves, but the incidence of lone sociopathic killers reeking death on Britain's streets has not yet reached a level to be noticeable by the same press who are quick to condone the dangers they allege such game to have.

Indeed, I recall that one of my school teachers wasn't sure whether one of the Grand Theft Auto titles was suitable for his son. Rather than going on other opinions, however, he decided to simply rent the game and play it. In doing this he was allowing himself to make the most informed decision possible about what he considered permissible and acceptable for his son to play. The result? After the rental time had elapsed he immediately bought the game to sate the compelling desire to keep playing the game to completion, often appealing to my class for advice on how to successfully carry out various tasks within the game. The son had to wait for his old man to finish before he even had a chance to play.

As charming as that story is, it's certainly not possible to put such a method into practice for every game, film, book, website, etc. their child would like to see, and so content warning of certain aspects present in games is hard to argue against. On the other hand the outright ban of a computer game for all adults only serves to raise the profile and carry out the games marketing for them.

For example, when the brutal killing of one teenager by another occurred in 2004 an again outraged press asserted that the game 'Manhunt' was causal factor in bringing about the savage murder. The game is undeniably violent, but the context of the plot and the fact that it was markets for an adult audience should not have been so easily forgotten. The gamer inhabits a protagonist who has been kidnapped and has woken up in a compound which is used to make snuff films (movies which depict the killing of people). The plot of the game is trying to escape the facility without getting caught and in turn killing many of the evil men trying to kill you in full view of the cameras everywhere. Various sectors of the press then alleged, off the back of comments made by the victims family, that the young killer had played this game obsessively in the weeks leading up to the murder. However, in a bizarre turn, it transpired to be exactly the other way around that the victim had played the game extensively while the killer had never laid hands on it.

Nevertheless the damage was done. In response to mounting pressure from the press, major game retailers refused to sell Manhunt. This ultimately drove up sales of the game overall. Recognising the effect such publicity had on sales, the producers behind manhunt were sure not to tone down the levels of violence for the sequel resulting in it being banned before its release in the UK.

What emerges from these scenarios is a familiar response, and video games frequently come up against this reaction from the more reactionary elements of the new media. It is very easy to generate shocking headlines and articles of groundless drivel about how violent games are and the fallout it must be wreaking, but this has culminated in regulations which lead to some quite bizarre rulings. Why should it not be okay to assassinate mercenaries hired by a rich sadist in one game but fine to kill green blooded fellow who, for all we know, mean us no harm at all? It seems that trying to take a moral position on what is permissible in the world of pixels is doomed to give rise to such farcical situations, and ultimately fail in its intent.

The viewing of films, on the other hand, is widespread. They are deemed to be a world apart in terms of cultural significance and ethical worth when compared to computer games. More importantly, the people who make such rulings on films have usually spent a lifetime watching and appreciating them. Gaming is unfortunately still perceived to be a juvenile past time, and the generation gap between those playing the games and those deciding what is legal to play is what is resulting in a more patriarchal relationship between censors and gamers.

Calum Grant is a freelance writer based in London. He has a background in physics and biology research, and science and mathematics teaching. You can find his website here.