Does BT need television to compete with other service providers? Should the owners who own the means of distribution be allowed to also own the content it streams? Wendy M Grossman explores the issue of network neutrality. 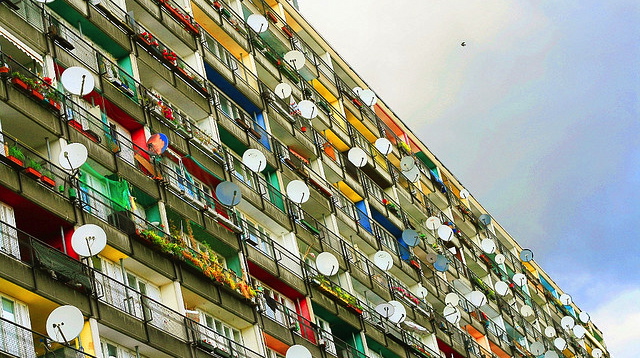 Is this the moment the UK starts fighting, like the US, over network neutrality?

Image: untitled by Jonas CC BY 2.0

This week BT announced it would give free access for its residential broadband subscribers to its two sports channels (BT Sport 1 and BT Sport 2) plus US-based ESPN. Is this the moment the UK starts fighting, like the US, over network neutrality?

For years the received wisdom has been that the UK is too different. In both countries the legacy monopoly telecommunications supplier ran into deregulation in the mid-1980s. In the US, that began with the court-ordered break-up of AT&T, leading to the set of seven "Baby Bells", which have since merged back into three, much like the shards of the liquid metal man in Terminator 2. In the UK, it's been government policy to open up BT's network to competitors, and its behavior is closely scrutinized. That's harder to do in the US where so much happens at the state, rather than federal, level.

While both countries have large companies wishing to lock consumers into bundles that include broadband, telephone, mobile, and television, the average British Internet user who cares to look has probably dozens of choices of supplier, not all of whom buy their upstream bandwidth from BT Wholesale. The average American is lucky if they have two.

The bigger differences lie in the way television is funded and provided, partly because of the UK's entrenched public service broadcasting and partly because of geography. Given the US's size, in many areas either you have cable or a satellite dish or you don't have television at all because the nearest broadcast station is too far away. In the UK, terrestrial broadcast blankets the nation and the major broadcasters (BBC, ITV, Sky) have teamed up to offer free satellite (Freesat) and broadcast (Freeview) systems whose array of channels is entirely competitive with cable or paid satellite if you can do without the premium channels (mostly movies and sports). I cut the cord on cable a year ago in favor of Freesat plus an online subscription to the tennis tours.

Given this situation, it's not surprising if BT thinks it needs television content in order to compete effectively with Virgin and other ISPs.

In 2010, the BBC's Rory Cellan-Jones asked the network neutrality question about BT when BT Retail's commercial director referred in an interview about prioritizing network traffic so that television streams would reach consumers uninterrupted. There are, Ofcom told Cellan-Jones at the time, no rules against the widespread practice of traffic shaping, and let's face it: if you're watching a video stream or making a voice call it's a lot more important to get your packets immediately and continuously than if you're loading a Web page or reading your email.

In 2011, BT's announcement of Content Connect raised similar questions; that wholesale service was, again, intended to speed delivery of streaming video by using local servers - which sounds like the kind of content caching that goes on all over the place.

For me, what raised more questions was BT's announcement in June 2012 that it had paid £738 million for the rights to 38 Premier League football games and then in February 2013 that it had acquired ESPN's UK and Irish channels. These channels are the basis of BT Sport, which will broadcast a load of football, in direct competition with Sky (and, they tell me, some women's tennis). We are now talking about the country's most significant telecommunications infrastructure provider competing directly with other companies whose content it carries.

Accordingly, this is the announcement that to me is the serious one. The really vital thing in ensuring network neutrality is not banning practices that speed service but in avoiding giving dominant suppliers leverage over their competitors or incentives to break it. Otherwise, you get discriminatory service - exactly what the EU is investigating Google for. This is the classic first principle of antitrust law: the owners of the means of distribution should not be allowed to also own the content that streams through it.

Two of the best-known cases under the US's 1890 Sherman Act illustrate the point perfectly: the break-ups of the movie studios and of Standard Oil. In the former, the movie studios were required to divest themselves of theater chains; in the latter, the company was broken up into dozens of smaller ones. As in the AT&T break-up, some of those smaller ones - Exxon and Mobil - have merged back together, but by the time they did the landscape had substantially altered.

In some of these cases you could argue that regulatory action was rendered unnecessary because new technologies were about to present them with new forms of competition. The AT&T break-up was in 1984 and separated local and long distance reveues; by 1990 the Internet would have begun threatening the latter anyway - although law professor Susan Crawford argues that the subsequent mergers have undone the break-up's competition benefits. Similarly, Paramount Pictures' break-up in 1949 was rapidly followed by the challenge of television.

We can't bet on such a radical change this time. Instead, BT may become a content supplier to other ISPs while, conversely, in the US Google is building out local fiber. Watch this space.