The world of Kindle 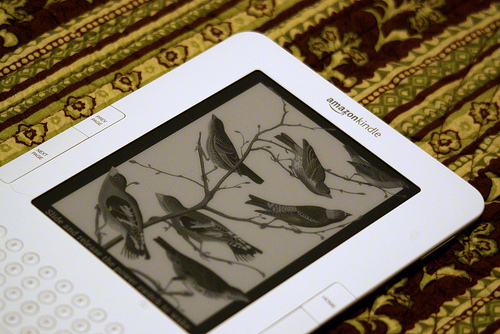 So Amazon has decided to boldly go where… quite a few people have tried to go before actually, in its recent move to try to monetise the creative talent (or otherwise) of the fanfiction community. If you hang around fandom long enough, you realise that roughly every seven years someone pops up who thinks there’s a pot of gold at the end of the fandom rainbow, with this most recent effort very likely prompted by the success of the Fifty Shades of Grey trilogy which started life as a piece of Twilight fanfiction.

What differentiates Amazon from its predecessors in this field is that it has actually acquired the rights to – so far – three pieces of creative real estate. US-based fans of “The Vampire Diaries”, “Pretty Little Liars” and “Gossip Girl” will soon be able to write certain types of fanfiction for these shows and books and try to flog them to fellow fans with Kindles.

I say certain kinds because Amazon places quite a few restrictions on what you can and can’t publish as part of its Kindle Worlds initiative.Crossovers (works building on two or more existing universes, like Doctor Whooves – the Doctor Who equivalent of My Little Pony Land) are a big no-no, probably because of the rights headaches they would entail. Pornography and “offensive descriptions of graphic sexual acts” - a definition of which will presumably be expanded upon in the detailed content guidelines provided by each licensor - are also banned from Kindle Worlds. Given the prevalence of both crossovers and explicit erotic content in fanfiction, these choices on Amazon’s part are both understandable and likely to get the project dismissed outright by a large proportion of the fanfiction community. Though according to an Amazon spokesperson “Fifty Shades of Grey” wouldn’t count as pornography under their definition as it depicts “consensual sex between adults”. Amazon may be in need of a dictionary. Offensive content, including but not limited to “racial slurs” and “excessive use of foul language” is not permitted either. That’s right, Amazon wouldn’t publish the works of Mark Twain or Irvine Welsh.

Other mechanics of the scheme are also interesting. While Amazon state in their content guidelines that they do not accept poorly formatted books, quality control in this area is unlikely to include the services of a professional editor. Amazon Publishing is of course already full of poorly written, badly spelled crimes against literature. A little purple prose set in an existing universe, written by a thirteen-year-old figuring out the mechanics of writing is hardly going to make a difference here. Except when it comes to fanfiction, it will: there are already countless sites all over the internet where fans can get such stories – as well some excellent work that could easily compete with published authors – for free. From a reader’s point of view, Kindle Worlds hardly provides any added value in exchange for your $3.99.

And what’s in it for writers? Well, for anything longer than 10,000 words, Kindle Worlds will be offering royalties of 35% of the customer sales price. Shorter works of 5,000 – 10,000 words get you a royalty rate of 20%. What’s notable here is the copyright deal: in theory you keep the copyright to any original, copyrightable elements of your work. In practice, the minute you submit your story to Kindle Worlds, Amazon gets an exclusive license to it, and can then grant a license to your copyrightable elements (e.g. a new character) to the original licensor (i.e. the rightsholder of the universe you’re writing in).

The only way this can look attractive is if you haven’t been in fandom long enough to know your way around it; to know, for instance, that much like EL James and Cassandra Cla[i]re you can easily file the serial numbers off your fanfic and suddenly make 70% of the customer sales price rather than 35; to know that you’d be competing with work available for free; to know that what you’re doing counts as transformative under US law and thus the fact that Amazon hold the rights to the universe you’re writing in probably isn’t a huge amount of added legal value to you either.

Which brings us to the choice of properties Amazon has decided to partner with for Kindle Worlds. As has been pointed out elsewhere, one of the motivations behind the three particular worlds Amazon has licensed is that Alloy, the company behind all three, is a book packager creating cookie-cutter content, the rights management for which is probably easier than for works created by individual writers and then sold to media companies.

Yet, taking this from a different angle, they look like strange choices. “The Vampire Diaries” is perhaps the most obvious one, jumping on the bandwagon that brought us “Twilight” with its 200,000+ fanworks across the two major fanfiction archives (Fanfiction.net/FFN and Archive of Our Own/AO3). Yet “The Vampire Diaries” barely has 30,000 fanworks associated with it. “Gossip Girl” has a grand total of 483 on AO3 and zero on FFN, and “Pretty Little Liars” has just under 5,000 across both archives. There are more fics about the hung (ahem) Westminster Parliament of 2010 than in some of these fandoms. Thriving communities these are not.

What the three “Worlds” do have going for them is that they are all aimed at teenage girls and young women – precisely the kind of people who are likely to not have been in fandom for long enough to know their way around. This is where Kindle Worlds does potentially pose a threat to the fanfiction community. By convincing kids that the “right” and “legal” way to publish and read fanworks is through a paid-for, restrictive service, Amazon has the opportunity to shape the idea of what fandom is and how it works for a whole new generation of fans.

This is where the fanfiction community needs to step up. Yes, it’s easy to dismiss Kindle Worlds as the latest in a series of poorly thought-out attempts to cash in on fanfiction, and yes, we’ve collectively seen off plenty of the predecessors. However, what Amazon may actually be doing is deliberately sidestepping the existing community in favour of changing the game for the next generation. With any luck, the next generation will know how to use Google, and will find the free, unrestricted, and often deeply strange world of the fanfiction community before they find Kindle Worlds; but it never hurts to reach out and put up some signs pointing in the right direction. The Organisation for Transformative Works is already doing a fantastic job here, with projects ranging from the AO3 archive to legal advocacy, academic study of fandom, and the preservation of fandom history and at-risk fannish works. Now would be a good time for the community to further rally behind them.