Patrick Ireland explores whether Plato or H.G. Wells might be able to help us understand the psychology of 'trolling' and online abuse. 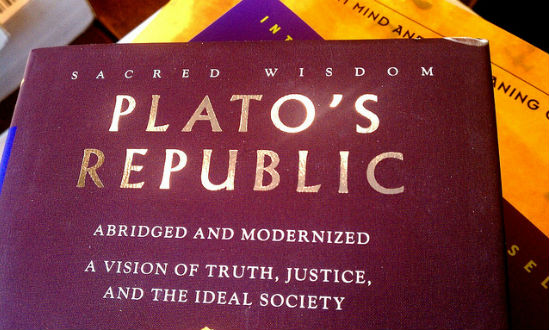 In recent weeks social media has been ablaze with controversy after an article entitled '24 Signs She's A Slut' began appearing across Facebook and Twitter. The article, which was published on the shamelessly sexist blog 'Return of Kings', proudly describes itself as being “for masculine men”. Other articles from the site include 'How Game of Thrones Depicts the Ultimate Feminist' and the 'Farce of Rape Culture in the Workplace'. Real masculine stuff.

As Bertie Brandes rightfully states in an amusing and equally important response to the article on vice.com: these bullies aren't worth worrying about. But let us pretend for a moment that these people are worth our time and discussion. What if we did take the so-called 'trolls' seriously? Or as seriously as you can take a group of people who claim "fat people don't deserve love” and that Game of Thrones somehow promotes a matriarchal feminist agenda. The question is why do we consistently see individuals using the web as a means of either expressing twisted worldviews or attacking unsuspecting innocents?

Perhaps, the answer can be found in philosophy (although admittedly, answers are very rarely found in philosophy). In Book II of Plato's Republic reference is made to a mythical artefact named the 'Ring of Gyges' which has the power to render its wearer invisible. Yes, I think we now know where J.R.R Tolkien drew his inspiration from...

In the chapter, Plato considers whether an individual can be moral or virtuous given the ring's power as they would not have to fear being punished for their actions. It is thus suggested that morality is simply a social construct: “for all men believe in their hearts that injustice is far more profitable to the individual than justice". This is a theme which is also explored heavily in H.G. Well's classic novel 'The Invisible Man'. Once again, invisibility allows the central character, a brilliant scientist by the name of Griffin, to seemingly escape the restrictive moral norms of society because he cannot be identified or punished for the crimes he commits. He robs various people (including his father who later commits suicide) and also attempts to murder his former best friend.

Is this essentially what's happening with online bullies? Are they suffering from a kind of 'invisible man' syndrome?

Recent thought seem to suggest that this could actually be the case. Online disinhibition effect - a term coined by Professor John Suler in 2004 – is described as a "loosening (or complete abandonment) of social restrictions and inhibitions that would otherwise be present in normal [social] interactions”. According to Suler, it can take various distinct forms:

* A Loss of Inhibition: people on the web become less guarded about their emotions and are thus more prone to extremity.

* You Don't Know Me: anonymity provides a sense of protection.

* You Can't See Me: the Ring of Gyges and the Invisible Man.

* See You Later: someone can simply express their opinions (however offensive or extreme) and not contend with the emotional consequences of their actions.

* It's All In Your Head: allows fantasies to be played out in the mind - certain stereotypes or emotions can be placed onto the 'faceless user' when engaging in discussion.

* It's Just A Game: cyberspace is perceived as being like a game and therefore not 'real'.

* No Authority: there are no authority figures on the web and as a result individuals feel like they can act freely.

It is clear that the web significantly alters how we would normally socially interact with other people. Speaking to someone online is radically different from a face-to-face encounter. As a psychologist specialising in this area, Graham Jones explains, "in the real world people subconsciously monitor the behaviour of others around them and adapt their own behaviours accordingly". Online however, we do not have such feedback mechanisms - most obviously reading body language, facial expressions and eye contact.

But as our lives become more integrated with the digital world should we expect to see a rise in people suffering from the disinhibition effect? Skype? Facebook? Twitter? Nobody can deny that more kinds of social interaction are frequently taking place over the internet. And if we're not socialising over the internet, most of us are browsing it anyways.

Olivia Solon makes an interesting point in a similar article ('The Psychology of Trolling') for wired.co.uk. She claims that there is a potential parallel between online abuse - a 'digital version of the poison pen letter' - and Broken Windows Theory . The theory, which was first developed in the 1980s, posits that areas hit hard by vandalism will actually encourage more vandalism in that area because it is then seen as a kind of social norm. Solon goes onto suggest that this could potentially happen with trolling unless serious action is undertaken; whether it be stronger social condemnation or outright censorship.

Indeed, I am still amazed at how quickly - and the extent to which - our lives have gone digital. After all, it's not just chatting to your friends that has spilled over onto the web. Politics. Shopping. Entertainment. Art. Sexuality. Sometimes it's as if we're all trying to replace ourselves with a digital double. Regardless, maybe it's about time we started to take these  'trolls' more seriously.