Aaron Stein looks at the importance of social media during the protests in Turkey. 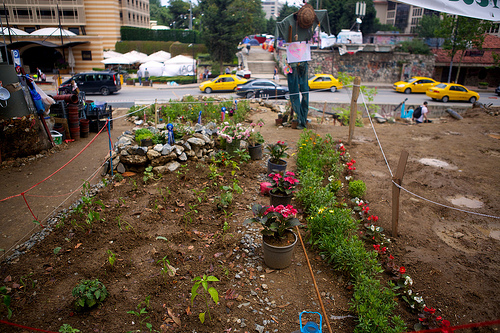 After weeks of protests, Turkish Prime Minister Recep Tayyip Erdogan met with members of the Taksim Solidarity Group – an umbrella group for the demonstrators in Gezi Park – at his official residence in Ankara last night, in order to come to an arrangement to resolve the current crisis. The meeting lasted for several hours and the two sides appeared to have struck a tentative agreement to end the protests.

The meeting came on the heels of more tough talk from the Prime Minister, as well as an aggressive government led information campaign to relay the Justice and Development Party’s (AKP) version of events to the Turkish and international audience. The AKP has relied heavily on closely coordinated talking points that attribute the protests to a plot by “foreign circles" uncomfortable with Turkey’s economic and political progress. The government relayed its version of events via Erdogan’s frequent speeches, Turkey’s state-run Anadolu news agency, interviews wither friendly journalists, and social media.

The counter-information offensive was designed to combat the protest movement’s successful use of social media and to try and cast the protesters as marginal. To be fair, some of the flags flying in Gezi and Taksim suggest the penetration of a slew of radical leftist organizations, whose causes belie the portrayal of the protesters as apolitical youth solely intent on carving out a more democratic future. However, those groups are a small minority, of what is largely a leaderless spasm of anger at the AKP’s rule.

The protests began as a small sit-in style movement to prevent the razing of Gezi Park – a small park adjacent to bustling Taksim square. Protesters and some journalists chronicled the protests daily on twitter; posting pictures of excessive tear gas using the twitter hash tag #dailygasreport. The twitter campaign gradually gained traction, anger swelled, and eventually boiled over after Reuters photographer Osman Orsal captured the ghoulishly iconic image of the elegant woman in the red dress being sprayed at close range with excessive amounts of tear gas.

After the police did manage to clear Gezi Park, the subsequent brutal put-down of the peaceful sit-in at Taksim Square, which touched off two days of intense street clashes, was once again captured and broadcast to the world via social media. As the clashes unfolded, Turkish citizens had little choice but to follow the events live via twitter or Facebook. Turkish media outlets opted not to broadcast the events, choosing instead to air their regularly scheduled programing. CNN Turk, for example, opted to air a documentary on Penguins on Saturday evening, even though intense clashes continued in cities all through out Turkey.

Media outlets in Turkey are owned by large business conglomerates, dependent on government contracts for the financial well being of their numerous different subsidiaries. While the tight relationship between the media and the party in power is not new in Turkey, the emergence of social media has allowed people to circumvent the government’s attempts to stifle news coverage.

The AKP, while having embraced twitter to spread its own version of events, has not reacted well to the use of social media. In 2012, Ankara Mayor Melih Gokcek, sued 600 people on twitter for insulting him. Moreover, after the tragic bombing of a town near the border with Syria in May 2013, a local court banned coverage of the events and the publishing of images.

Nevertheless, images were quickly uploaded to social media sites and spread via numerous retweets, independent blogs, and Facebook accounts. For example, Elliot Higgins, the blogger behind the excellent Brown Moses Blog, created two databases of photographs and videos of the tragedy, in spite of the ban in Turkey and the local media’s inability to publish its own images.  The Reyhanli coverage, therefore, foreshadowed the power of social media to circumvent the AKP’s media bans.

During the protests, Erdogan labelled social media a “menace” and a device to “spread lies.” Turkish police have arrested 25 people in the coastal town of Izmir for allegedly using social media to incite violence. In tandem, the Transport Ministry is now investigating twitter, claiming that “ [it] doesn’t have a legal basis in Turkey. They take ads but they do not pay tax in Turkey. It should establish a company compliant with the Turkish Commercial Code, like Facebook and YouTube.”

Despite these efforts, the number of social media users in Turkey continues to increase. However, rather than embrace the use of this new medium as a tangible expression of freedom of speech – which is guaranteed under Article 26 of the Constitution – the government appears intent on finding the legal justification to prevent the use of twitter. The AKP’s current legal effort to stifle twitter undermines its campaign rhetoric and its carefully cultivated image as the party responsible for the deepening of Turkish democracy.  Thus, while the AKP may have a point about a small sliver of the protesters not being real democrats, its handling of the crisis, as well as its current effort further curb freedom of speech, is hardly representative of a party intent on deepening personal freedoms.

The AKP has a responsibility to protect the right to freedom of expression and should not shy away from embracing the growing use of social media. The party is the first in Turkey to have to govern in an environment where an increasing number of journalists, academics, and interested citizens are using social media to relay their thoughts about current events in real time. Thus, the party has a choice: It can either embrace freedom of expression and protect the use of social media, or it can opt to invent legal justifications to curb its citizens’ rights to freedom of speech.

If the government continues to pursue the latter of these two options, the AKP will have failed to embrace and embody its numerous campaign pledges to strengthen Turkish democracy. Moreover, it will have established a worrying precedent for future party’s to follow, should they be faced with a similar protest movement in the future.

Aaron Stein is a doctoral candidate at King's College London and a researcher specializing in Turkish politics at the Istanbul-based Centre for Economics and Foreign Policy Studies. He blogs at Turkey Wonk. Follow him on Twitter: @aaronstein1.